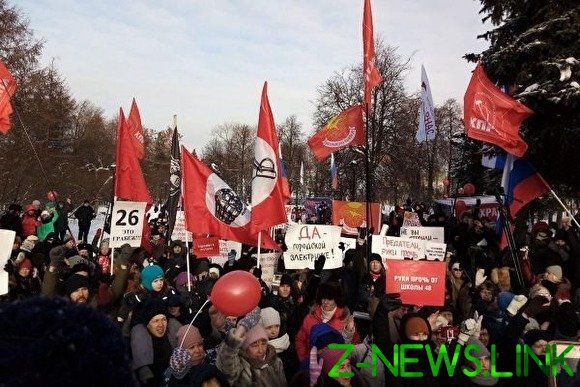 About 1 thousand citizens in Perm came to a coherent protest against the cancellation of trains on a stage 1 Perm — 2 Perm and the cost of travel from 20 to 26 rubles. According to “the Urals. MBH media”, the townspeople gathered, despite the cold -20 degrees.

The publication explains that the train was bound the most distant of the Ordzhonikidzevsky district of the city center, the residents could get to Perm-2 for 30 minutes. Since January 27, they arrive at the station Perm-1, which is quite bad transportation. To help the passengers, the mayor’s office sent a bus, but they are unable to cope with the stream of citizens. As a result, in late January and early February in Perm happened transport collapse. At the same time, public transport has cost 26 rubles.

See also:  The MP explained why it is impossible to return the Crimea by military means

At the meeting, citizens demanded the resignation of the principal officials of the city — mayor Dmitry Samoilov and his Deputy Lyudmila haciyeva.