Home / WORLD / In Paris, dramatically increased the level of violence in the protests of “yellow jackets”

In Paris, dramatically increased the level of violence in the protests of “yellow jackets” 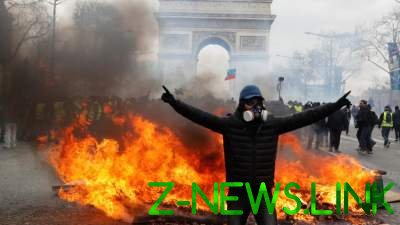 The French government has admitted that security measures were “insufficient” to stop the arson and looting on the part of participants of the action “yellow jackets” on the Champs Elysees in Paris.

The demonstrators staged clashes with the police on Saturday, around 80 shops and offices were looted. Philip on Sunday acknowledged that there were “shortcomings” in security that need to be corrected.

“The analysis of yesterday’s events shows that the action taken was not enough to deter violence and prevent crime,” said Prime Minister, adding that he had to meet with the President Emmanuele a Macron on Monday morning.

Makron was interrupted by a short trip on skis to return to the capital for a crisis meeting on Saturday and vowed to act “decisively.”

Retailers expressed concern about the 18th of the weekend, a powerful anti-government actions. On Saturday the protests was characterized by a sharp increase in violence after several weeks of decreasing number of protesters.

“I have the feeling that it will never end. You can protest, but why destroy everything? …Repair Windows will cost at least 25 000 euros and a significant part of the goods have disappeared,” said the Emir of Fatnassi, whose store on the Champs Elysees was destroyed by protesters.

The anarchist group “black bloc” on Saturday torched the famous Brasserie Fouquet, as well as the luxury handbags shop Longchamp.

Was also damaged clothing stores Hugo Boss, Lacoste and Celio, as well as the Bank, chocolatiers and a few newsagents.

Police used tear gas, stun grenades and water cannons to subdue protesters who had gathered at the foot of the arc de Triomphe.

Representatives of the “yellow jackets” on Sunday urged the interior Minister Christoph Castaneda to resign over the government’s inability to contain the “black block”. They accuse the anarchists in undermining the peaceful weekly demonstrations.

The judicial source said that after Saturday’s events 200 people, including 15 minors, were detained.