Home / business / In Odessa, made an emergency landing the plane, EN route from Russia

In Odessa, made an emergency landing the plane, EN route from Russia 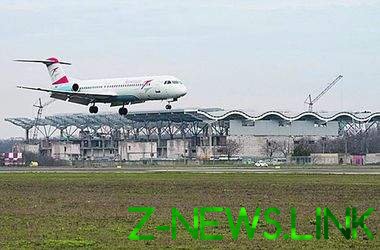 An emergency landing was carried out due to the discovery on Board of the suspicious bag.

The plane, EN route from Russia to Turkey made an emergency landing at the airport “Odessa”. About this Facebook said Advisor to the Chairman of the Main Directorate of Ukraine in Odessa region Ruslan Forostyak.

“The international flights of Turkish airlines, flying from Domodedovo (Moscow) to Turkey appeared off-nominal situation: one of the passengers complained of a condition, namely, upset stomach, and for a long time was in the toilets. The crew given the suspicious actions of a passenger, conducted a detailed review of the toilet cabins and found the room hidden a suspicious bag. The discovery forced the crew to resort to the decision to make an emergency landing at the nearest airport was the international airport “Odessa”, – Forostyak wrote.

See also:  The founder of Vkontakte sharply reacted to the blocking of Telegram in Russia 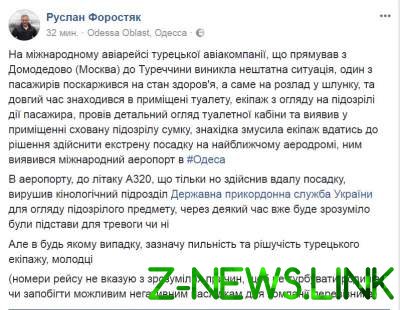 According to Forostyak, now in the airport, to the A320 which has just landed, went unit the bomb squad Department of the Odessa region for inspection of suspicious object.

On the website of the airport “Domodedovo” at 16:43 (GMT) flew with Pegasus airlines in Istanbul.