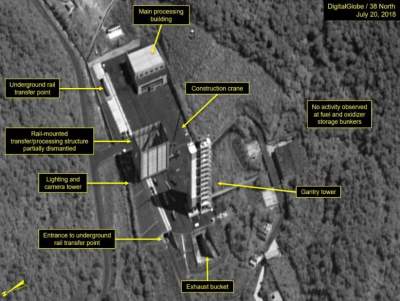 North Korea carried out the dismantling of buildings at the missile test site.

According to them, the building that used to build rockets, dismantled. In addition, demolished and the adjacent site for testing of rocket engines.

“The DPRK began dismantling key facilities including the railway station for processing, as well as the test stand close to a rocket engine” – said in the message of the group 38 North, which has been monitoring the situation in the DPRK.

See also:  US military aircraft are very close to the borders of North Korea

Earlier, the sincerity of the intentions of the DPRK to disarm experts questioned, despite the fact that in June, the leaders of the U.S. and North Korea formally agreed to complete denuclearization of the Korean Peninsula.