In Nikolaev police officer started a brawl in a cafe. Video 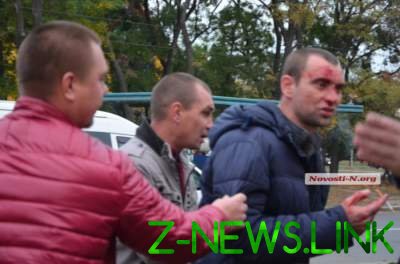 Drunk police inspector entered the cafe and began to stick to the visitors.

Fight with participation of inspectors and visitors of one of cafe in Nikolaev occurred on Wednesday, October 25, in the evening.

Drunk police inspector entered the cafe and began to stick to the visitors. There was a fight which stopped the patrol arrived on call workers café.

As reported by the state of Ukraine in the Nikolaev area, district, who staged a fight with the visitors, were two. Both were tipsy. Both have been removed from service.

“For an objective clarification of the circumstances of the incident, which occurred in one of entertaining institutions of the city, where two of the precinct officers Ingulsky police Department in a state of intoxication became participants of the conflict to fight with the other visitors, assigned to the investigation conducted by the Inspectorate staff… During the investigation will be analyzed and assess the actions of officers and decision regarding continued presence of law enforcement officers at posts and in the structure of national police in General”, – told the police.