Home / Video news / In Nikolaev broke through the sewers: images of emergency. Video

In Nikolaev broke through the sewers: images of emergency. Video 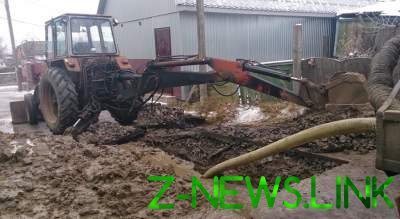 Through the city flows the feces.

13 Aug Nikolaev, on crossing of streets of Skorokhodov and lane Shipbuilders, was a large-scale breakthrough of Sewerage systems.

A powerful flow of sewage escaped from under the hatch and a deep pit, which was formed in the middle of the roadway, and headed down the street to the river the southern bug.

Eyewitnesses also say that the stream itself and in its intensity the whole resembled a small river, which however, is not so pleasant in its content and smell. The volume of wastewater discharged pretty quickly convinced that over the next few days in the river the southern bug will get tons of sewage water. Unbearable smell was felt in several nearby streets.