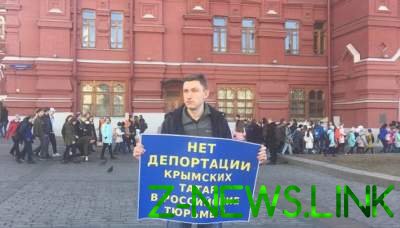 An activist stands on Manezh square in Moscow

Russian activist Konstantin Kotov holds in the center of Moscow picket against the arrest of 23 of the Crimean Tatars, deported in Rostov prison.

“On 27 March in the Crimea was detained more than 20 people. Of the Crimean Tatars. The government can not stop and continue the repression of an entire people. The list of Ukrainian political prisoners increases. However, in spite of everything, people do not give up: the Crimean solidarity, not to destroy!” – stated in the message.

See also:  In Moscow there is a skyscraper built by trump

In the photo activist stands on Manezh square in Moscow and holding a banner “No deportation of the Crimean Tatars in the Russian prison.”

In the comments “Crimea.Realities” Konstantin Kotov said that during his pickets approached it the Russian security forces and checked the documents. The activist plans to stand for up to 17 hours.

See also:  The area of the ATO: the situation on the front lines deteriorated