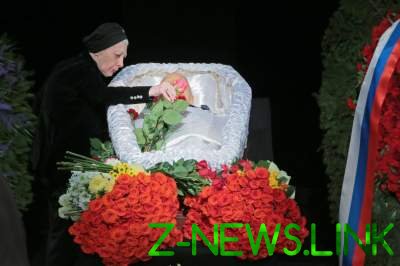 To say goodbye to actor came a lot of fans.

A farewell ceremony was held in the Great hall of the “Lenkom”, where the actor worked for more than 20 years.

To say goodbye to Shutter came a lot of fans of his work.

The funeral service lasted two hours, and then shouts of “Bravo!” and applause a artist coffin carried to the graveyard.

Actor was buried on the 5th portion of the Novodevichy cemetery. Next – the graves of Vladimir Zeldin, the Lion Durov and Ilya Glazunov.

Leonid Bronevoy has died on 89-m to year of life. He starred in such famous films as “the Pokrovskie gate”, “the Myunghauzen”, “Formula of love”. However, his most famous work is the role of the chief of Gestapo Muller in “17 moments of spring”.