Home / business / In Moscow held a picket in support of Sentsov

In Moscow held a picket in support of Sentsov 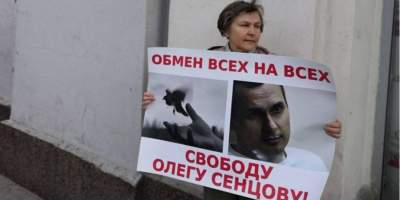 Activists came to the Arbatskaya metro station with posters.

In Moscow on Sunday, may 5, were held pickets in support of Ukrainian film Director from the annexed Crimea Oleg Sentsov with the requirement of exchange of detainees between Russia and Ukraine.

Activists came to the Arbatskaya metro station with posters of the Exchange of all for all! Freedom Oleg!, No to war with Ukraine.

After the beginning of the action employees of the Russian police approached one of the community activists Konstantin Kotov for verification of documents.

“They checked my passport, saw I was a citizen of Russia. Wanted another check, but I didn’t show. Long argued, I argued that the check to verify they are not eligible. In the end, they left,” he said.

May 1 in Moscow have passed single pickets demanding to release Ukrainian citizens who for political reasons are held in Russia and her annexed Crimea, in particular, the Ukrainian soldiers who were captured by the FSB in Crimea, in November 2018, Oleg Sentsov, a Crimean resident Vladimir Baloga, Crimean Tatar activists.