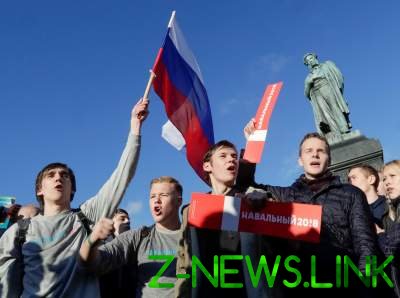 In Moscow detained activists, who again came out on Manezh square

In the night of Sunday the group of activists were planning to stay the night in the square, but then they were replaced, and then was detained by police.

Supporters of Russian opposition politician Alexei Navalny, once again came to the Manege square, was detained. RBC said one of the organizers of uncoordinated action in support of Navalny Nadezhda Afanaseva.

“We are very tightly screwed together. Although we have not cried and we had no banners. We are now in the paddy wagon, taking us to the police Department of the district of the Airport,” she added. According to her, were detained nine people. About the detention also wrote in his Twitter blogger Denis Styazhkin. He posted a photo of paddy wagons on the square. Styazhkin asserts that in the square were detained 14 people. Yesterday in Moscow has passed an uncoordinated action in support of Alexei Navalny, which has been attended by from 700 (estimate of the Ministry of interior) up to 3 thousand people (estimate of Navalny’s campaign staff).

The event started around 18:00 on Pushkin square, at the rally were detained several people. Then the activists moved to a Manezhnaya square where, according to “Protest” they were going to stay the night. Around 00:45, the police drove protesters from the square, and then began to arrest.