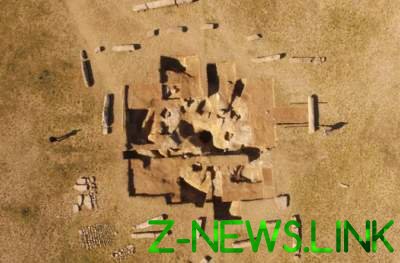 Archaeologists from Osaka University and the Institute of history and archaeology of the Mongolian Academy of Sciences are studying the ruins of a unique monument, surrounded by 14 stone pillars with Turkic runic inscriptions.

The funerary complex of Domain-Shiree is located near the mountain Delgerhaan in the aimag Sukhbaatar in the East of Mongolia. Japanese-Mongolian archeological expedition studying it in 2015.

Stone tomb in the center of the complex surrounded by a high stone steles with runic inscriptions, informs EurekAlert!.

See also:  Inside the skeleton of a mammoth, scientists have discovered a "surprise"

Osaka University and Institute of History and Archaeology, Mongolian Academy of Science

Radiocarbon Dating of fragments of sheep-skins and bones of the horse, taken from a sarcophagus, allowed us to determine that the tomb was built in the VIII century, at the end of the Second Eastern Turkic Khaganate.

Professor Takashi Osawa was able to decipher runic inscriptions and find out what is buried, he held the position of yabgu, “Vice-king”, and was commander in the Eastern Mongolia during the reign of Tengri Kagan (734-741 year).

Data indicate that this region was the center of the Eastern Turkic Khaganate, the location of which was not possible earlier to learn from the ancient texts.

This monument will allow to study the features of government in this territory, the foreign policy of khanate and other important aspects of life of ancient nomads, archaeologists believe.