Home / WORLD / In Mexico, on the tarmac of the airport in three minutes collectors were robbed

In Mexico, on the tarmac of the airport in three minutes collectors were robbed 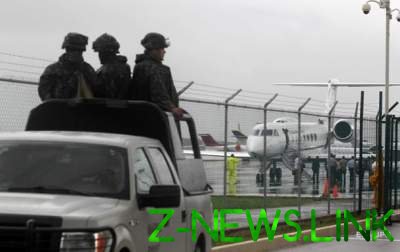 The raiders got more than 20 million pesos – more than $1 million at the current rate.

The robbery was committed on the truck collectors on the tarmac of the airport in the state of Guanajuato in Mexico. About the incident reported on Thursday, April 4, Pacific airport group, which manages the airport.

See also:  In the US, the car flew into a crowd of people: there are dead and wounded

Armed men in masks drove to the airfield, breaking through the fence and attacked the guards that were supposed to load the money on the plane.

“During the attack, which lasted about three minutes, the SUV was not parked on the runway where no aircraft,” according to the statement.

It also notes that the incident did not affect the operation of the airport and not jeopardize the lives of passengers.

See also:  In Rivne, there were three traffic accident: there are victims, among them a child

The raiders got more than 20 million pesos – more than $1.1 million at the current rate.

To detain criminals in hot pursuit failed, the authorities continue to find them.