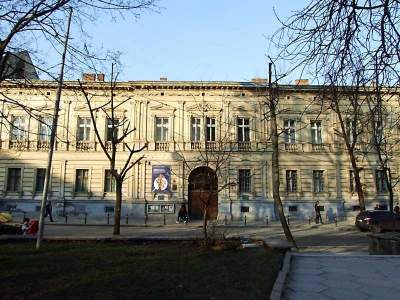 It is reported that during inventory, the staff found no more than 600 works of art.

From the collections of the Lviv art gallery disappeared 621 of the Museum is the sculpture, ancient books, paintings, valuable coins, and even furniture. The lack was discovered during the inventory of Museum complexes, which are included in the gallery. This was announced by the Director of the Lviv art gallery Taras Wozniak and provided a detailed list of all works of art, which were missing the Museum.

“In the winter when we discovered the disappearance of ancient books, we started a detailed inventory of all Museum collections. It turned out that there was a General lack 621 works of art from different periods, starting from the XVI century to the XX century. I from memory it is difficult to say how many works of art disappeared and somehow divide them into groups, but I do know that the greatest number of exhibits were missing in the repository of the Olesko castle,” said Taras Wozniak.

According to Taras Wozniak, the greatest number of exhibits were missing in the repository of the Museum “Olesky castle”, the main guardian of which Tatyana Sabodash recently sent a letter to President Petro Poroshenko, in which he said that Taras Wozniak, she wrongly blames the disappearance coins and the substitution of Museum exhibits. In turn, Taras Wozniak addressed a statement to the police.

“For me as the gallery Director this inventory and its results are important not only in order to punish someone – it’s the job of law enforcement. To me this story read the real picture of what is happening in the gallery and that should change to such situations. Now we are only quantitatively evaluated, what is missing. Next, we will work on identifying counterfeits of authentic exhibits copies. That is, we have yet to discover if there are among the items that are in stock, fakes,” – said Taras Wozniak.

We will remind, in January it became known that from the collections of the Lviv art gallery disappeared about a hundred old books. After counting it turned out that kidnapped more than 220 books, among them one of the two copies of the “Apostle” of Ivan Fedorovicha, dated 1574.

Then the police opened criminal proceedings under article 191 of the criminal code (assignment, waste of property or taking to them by abuse of official position), in which in August the law-enforcers raided the house of former Director of LGM Larissa Woznicki. At the same time, the current Director of the gallery, as promised, continued detailed inventory of all Museum collections gallery.

Alexander Gabyshev, previously called himself a shaman-warrior and planned a “March on Moscow” with the …