In luck disrupted the screening of a film about Soviet pilots 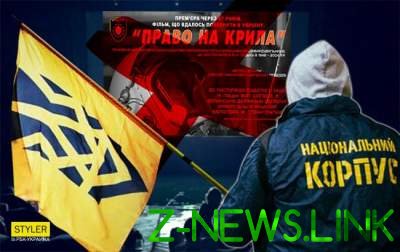 Screening of “Right wings” for veterans of the army and intelligence about the fate of the Soviet pilots was organized by the Public formation of the “Volyn shield” and the organization of the Volyn avialyubiteley “Oval”. The movie came a few dozen people, mostly older people, veterans.

While watching burst into the room, the representatives of “Svoboda” and “Right sector”, among them – people’s deputies from IN “Freedom” Nikolai Romanyuk and Nicholas fedyk and other activists. They demanded to stop the show and reminded the audience that in Ukraine today is the Day of memory of victims of Holodomor. According to the nationalists, in such day it is unacceptable to host a film devoted to the Soviet pilots. The room began a verbal altercation, during which the initiative to hold a film screening for veterans called “nostalgic gatherings”.

The organizers explained that the day of the event they chose randomly. This day the hall was free. The head of “Volyn shield” Igor Levchuk called to the scene the police. The police arrived, however, the dispute did not intervene. As the nationalists were given to understand that to continue the event they didn’t, the organizers were forced to declare that the show is postponed indefinitely.

“See you all on the events of Holodomor victims,” he said finally, all attendees Svoboda Nicholas fedyk. Later, the Deputy head of the Volyn cells “National corpus” Alexander Dmitruk was published on his page in Facebook video breakdown of film screening and wrote: “a Film of unknown people on the Soviet air force on the anniversary of the Holodomor. Levchuk and operation of elderly retirees officers gathered to cry on “What country was.”

National housing together with the National teams and counterparts with “Freedom” and “Right sector” didn’t allow them to talk. Today they are nostalgic, and tomorrow raise the flags of the DNI and shit, ” wrote Dmitruk.