In Kiev the robber tried to strangle a passer-by 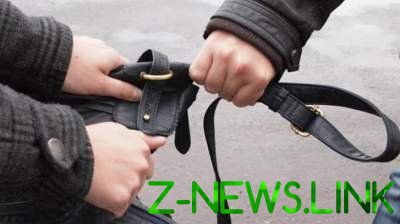 The man stole the gadget.

The attacker approached the man and started choking him, then took away the mobile phone from the bag and ran away. For the offense, the defendant received five years imprisonment with a probation period of three years. The incident happened in June of this year in the Podolsk district of Kiev. Then the police were called by a passerby and reported the robbery.

See also:  A kick in the ass and money on the spot: brave the money changers offended armed-robber

Police officers arrived on the call, the victim said that he was sitting on a bench and listened to music in headphones. At this time he was approached by a stranger who grabbed his hands behind his neck and began to choke. Then, the attacker took the device and ran away.

The victim gave a detailed description of the offender, which police began the search. Near the crime scene, they noticed a similar man, who was later detained. The attacker was 43-the summer inhabitant of Kiev.

See also:  In Kiev, the foreign car was hit by a military Prosecutor declared the plan "Interception"

The sentence Podolsky district court of Kyiv attacker for committing a criminal offense under part 2 St. 186 (robbery) of the Criminal code of Ukraine and sentenced to five years imprisonment with a probation period of three years.