In Kiev the drunk driver has rammed seven cars 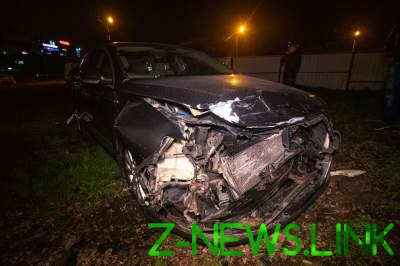 On the night of may 1 in Kiev, prospect Grigorenko had a serious accident. The accident damaged seven cars. Fortunately, has done without victims.

According to witnesses, the Mercedes was moving along the Avenue Grigorenko in the street Boris Hmyria. The driver of the car ignored the division of the carriageway and slammed into the green zone. After about 100 meters, the man demolished the fence of the Parking lot and rammed seven cars.

At this point in the Parking lot there were many cars, but came under attack: the Volkswagen Passat, Toyota Corolla, Mitsubishi Lancer, Daewoo Lanos, Citroen, Toyota Highlander and one Volkswagen Passat. The car received various injuries. A few of the cars completely crushed.

Miraculously managed to avoid casualties. The man who was driving a Mercedes, got a head injury, but refused hospitalization. However, he denied that was driving the car. However, witnesses say the opposite.

The driver had obvious signs of alcoholic intoxication. He offered to take the test for the presence of alcohol in the blood Drager. But, when the two witnesses he refused to undergo the examination. It was entered into the record. Also the man was pushed and yanked law enforcement officers. The conversations and warnings has not helped. The man was handcuffed.