Home / business / In Kiev, the car lost a wheel after hitting the hatch

In Kiev, the car lost a wheel after hitting the hatch 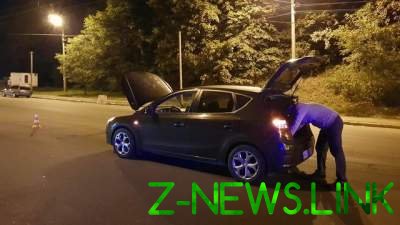 The car severely battered after an unexpected incident.[/b]

A serious accident took place in Kiev on Friday evening on the street Stetsenko.

According to preliminary information, the driver of the Opel, moving in the direction from the metro station “Syrets” to the International area at speed ran into the road Luke, who is in the area of repair work, off the road towards the oncoming curb, crashed into several fences and lost all the wheels.
I worked at a place the police.

Earlier in Borispol patrol made up of three administrative material on the drunk driver who caused a car accident.

As reported by the patrol police of Boryspil, about two o’clock a group of young people vacationing in one of the cafes in the city centre, was going to go home. To do this, they decided to take a taxi, which stood at the entrance. However, starting a dialogue with the driver of the Peugeot, the young people suspect that he is in a state of alcoholic intoxication. They decided not to put myself in danger and choose another car.
[b]See also: a Terrible accident in Kiev: the driver lost legs[/b]

At this time, the taxi driver, having left on the curb, injured one of the girls. Between men a fight ensued, the witnesses of which was the outfit of the State security service. Realizing that something happened, they blocked the exit to the taxi driver, detained him and called the scene the crew of the patrol police and ambulance