Home / Society / In Kiev, near the metro entrance explosion

In Kiev, near the metro entrance explosion 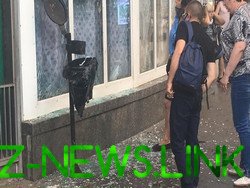 One person was injured during the explosion of an unknown object near the entrance to the metro station Shulyavska.

In Kiev, near the metro station shuliavska on Friday evening, July 17, occurred the explosion of an unknown object, man. This reports the press service of the police of Kiev.

“Today at 20:10 on the specialline 102 received information that on Victory Avenue at the entrance to the metro station Shulyavska the explosion occurred. On call immediately left the police, investigative team Chief and district police administrations, specialists of explosive service, cynologists and representatives of other relevant services”, – stated in the message.

At the scene it was established that the explosion occurred in a garbage urn. As a result one person was injured, he was hospitalized in medical institution. The identity of the victim is established.

On the scene working law enforcement officers who conduct the necessary initial investigations and establish all the circumstances.

For safety bomb experts examined the surrounding area: there are no suspicious or dangerous items detected. The information collected on this fact was registered in the Shevchenko district police office. Being tested, the results of which will be made appropriate procedural decision.

Recall that in Zhovti Vody the man exploded grenade f-1, the result of which he died from his injuries.