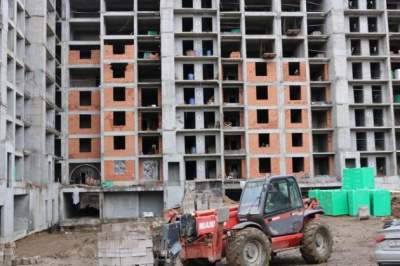 Experts predicted growth of housing prices in new buildings from 2018.

Suspicious your home, you can also identify at heavily discounted price, which so willingly fleeing customers. According to experts, a normal apartment building can cost less now than 14 thousand UAH. per square meter, but this meter in high-quality new building, for example, in Kiev will cost not cheaper than 16-17 thousand UAH. per square.

Thus, the cost of housing next year, I assume the builders will grow by about 20%.

According to forecasts of Minregionbud, the average cost of construction per square meter in the coming year, the national average is 12 171 UAH. In Kyiv this figure is equal to about 14 340 UAH/sq. m. however, to understand the ultimate value of the square of the apartments here should add more and costs for land allocation, approval of project documentation, etc.

“If you try to estimate the cost of housing construction in accordance with construction norms, to this figure you can add up to 20%. So, for example, in the capital in 2018 square meter cheaper than 16-17 thousand UAH. you will not find,” says Grusevich.

See also:  The fighters attacked out of the city and heavy artillery, killing military

In General, according to real estate experts, this year price in the primary market dipped slightly in dollar, but unchanged in local currency. Continue to become cheaper new apartments are unlikely, despite a drop in demand, emerging in the spring of this year.

To save money, buyers get is that the wave of Christmas stock, which, by the way, this year will be not as much as before. Such steps are now mostly only those developers who just come on the market with the sales, or those who need to sell the remnants of flats, say realtors.

“Developers will rather freeze the construction site than globally lower prices. Now the average value of the square of the primary $800-1000. It complexes with very high probability it will be completed. If the Builder offers a lower price for a good think about why he does it and whether such a complex completed on time,” said the President of the Association of realtors of Ukraine (ASNU) Edward brazas.

See also:  In these countries, housing is going up faster just

According to experts, this year the Ukrainians were often bought apartments in the economy segment. If last year buyers prefer and the wallet was the one – and two-bedroom apartments for $25-60 thousand, now the majority of transactions have moved to the cheaper segment of $20-40 thousand

Due to the more attractive pricing, many buyers have switched from the primary to the secondary market. Here, housing prices continue to slowly descend. Though not as fast as a year ago.

“The pace of falling prices on the secondary market in recent months slowed to about 0.5-0.6% in the month. The cost of a square, for example, in Kiev, now ranges from $1050-1100. In the short term, falling prices will continue and the market will respond positively to such a situation. But prices will go down slightly — by about another 1-2%,” — said Edward brazas.