Home / Video news / In Kiev detained the driver “hammer” that hit the child in the crosswalk. Video

In Kiev detained the driver “hammer” that hit the child in the crosswalk. Video 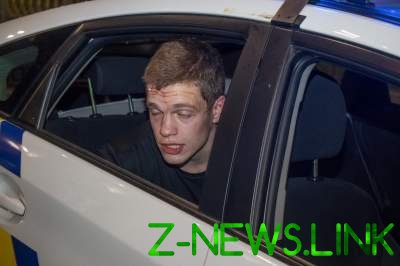 From traumatized eight-year-old girl was killed.

In Kiev, Lesi Ukrainki Boulevard, the driver of a Hummer knocked down an eight-year girl.

“The driver of the Hummer was hit by an underage girl who passed road on a pedestrian crossing. After arrival the driver of a foreign car has disappeared from a scene”, – said the press service of the police of Kiev.

“At the scene works investigative team of the district police, patrol and investigators of the Main Directorate of the National police in Kiev”, – stated in the message.

The edition “Informant” reports that according to preliminary information, the girl and her mother crossed the road at the regulated pedestrian crossing on a green light. At this time, the Hummer, not stopping on red, hit a child and tried to escape from the scene.

The driver also removed the numbers from the vehicle. The patrol was able to locate and detain the offender at the address: street Mechnikova, 2 near Convention centre “Parus”.

During the detention the guy was kicking and screaming being unfair. According to police, the first signs of alcoholic intoxication at the driver, but to confirm or deny that can result.

See also:  A powerful explosion near Kiev: footage from the scene of an emergency. Video

From the collision the child suffered multiple fractures, injuries were incompatible with life. The medics in the ambulance pronounced him dead. Her mom doctors also had to bring to life.

According to media reports, a driver-killer who knocked down the girl on a pedestrian crossing turned out to be the Director, owner and investor of the firm Fit & Sweet Kirill Ostrovskiy.