Home / Incident / In Kiev burned down a residential building

In Kiev burned down a residential building 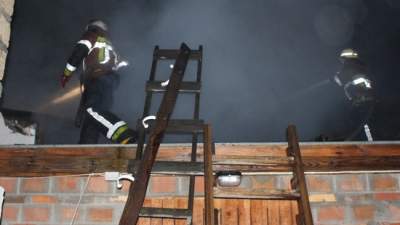 The incident occurred in the Dnieper area.

In the night of Saturday, October 28 in one of private houses of the Dneprovsky district of Kiev there was a big fire.

It is noted that the data on fire one-storey dwelling located on the street of Innovators, 39, arrived in quickly-the coordination center rescuers at 00:25 on October 28, after which the scene is headed next fire-rescue units.

It was found that lit up the roof of the house, after which the fire spread, covering an area of 100 square meters. To prevent the further spread of fire, localized the fire has already succeeded at 01:13, while all the fire was liquidated at 01:32.

Within the fire fighting involved 35 personnel of the capital rescuers and seven units of special and basic firefighting and rescue equipment. At the moment, are the causes of the fire.

See also: hard the accident killed a resident of Kyiv

“Thanks to prompt and harmonious actions of fire and rescue units managed to prevent flame spread on the entire area of the house and into a neighboring house which is located close”, – stated in the message of the SSES.