In Kiev burned a hostel for immigrants. Video 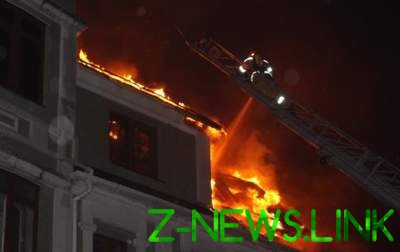 The residents managed to leave the building.

It is noted that at the time of fire in the hostel were the people – IDPs and ATO participants.

“Without victims. The residents managed to leave the building, now they are on the street”, – stated in the message.

On the site there are also medics and rescuers. According to eyewitnesses, the building collapsed roof.

According to the channel, the fire started at 4:30, at the same time the Main Directorate gschs in Kiev reported that information about fire in the building on the street Obukhov, 60, arrived to rescuers at 3:39, 5:48, he was localized, and at 6:38 is eliminated.

“Managed to prevent the spread of flame on the 1st and 2nd floor of a residential building… To extinguish the fire were attracted 18 units of basic and special equipment, as well as 67 people of staff. During a fire nobody has suffered”, – is spoken in the message.

According to preliminary data of the SSES, on the ground floor of the building there were 35 people evacuated from the ATO area.