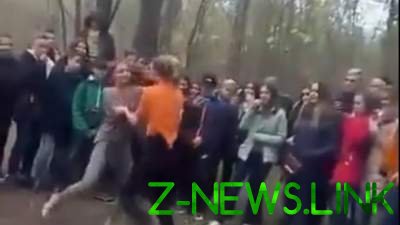 The incident, without interfering, watched dozens of teenagers.

In Kherson region there was a brutal fight between two Schoolgirls, which, without interfering, watched dozens of teenagers.

According to him, probably fighting pupils of schools №1 and №3 in the city of Kakhovka. The incident occurred on 4 November.

“One of the girls in the social network have created a closed group and invited other students to find a relationship with another girl. The fight took place in the forest over the Kakhovka. The audience were students from different schools of the city, and pupil of the 1st and 3rd school” – said the head of the Department of education Kakhovka city Council Michael Potter.