Home / Incident / In Kharkov, a bystander saved a baby from a burning house

In Kharkov, a bystander saved a baby from a burning house 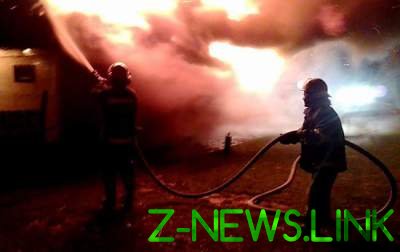 To save the child, unfortunately, failed.

In Kharkov, a passerby pulled a baby from a fire house. The stranger called for help two frightened boys aged 2 and 3 years, who explained that the house left their 8-month-old sister.

Footage of the rescue zafiksirovany observation of neighbors. “It is this: first do and then think,” – says the act is a 40-year-old Dmitry Mikitchenko. He admitted that he had no fear and thought only of the search in the smoke of the child. “Lying on the bed. I just grabbed and exit”, – said the lifeguard.

Little Pauline was burned, but breathing. Ambulance from the scene took her along with grown-up children, but to save the baby failed, because she had 50% of skin burns – the baby died in the hospital. The mother of the children appeared, when the fire has extinguished. The woman argued, not at the moment. “It is in his explanation notes that she left on business,” – said a police spokesman Konstantin Sheremet. However, the owner of the house, the camera which recorded the fire, insists that the woman wasn’t home for a few hours. “Left at 11:30, and came almost at 13:30,” says neighbor Diana Avdeeva.

Older children called adults for help, he swallowed the acrid smoke, but will live. “Children conscious, behave adequately” – has told the head of Department of the regional children’s clinical hospital Sergey Bevz. The more days children spent in the hospital alone, only then to him came his father. The neighbors don’t think family is unreliable, however, and do not understand why small children were left alone. Meanwhile, firefighters suggest that the cause of the tragedy became childish pranks with matches.

The police has no claim to the 32-year-old father of the baby, because he’s in the fire worked at the plant. The actions of 29-year-old mother, housewife militiamen regarded as willful failure to perform parental duties. But to detain, or to take children from women, because the family never came into the view of militiamen.