Home / Video news / In Kharkiv, has completed testing of the new APC. Video

In Kharkiv, has completed testing of the new APC. Video 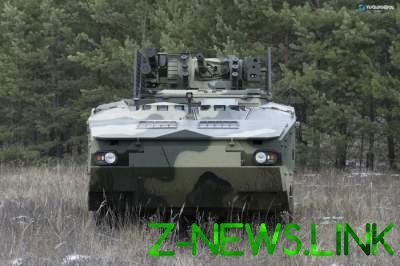 The main feature is the modular approach in the construction of body armor.

The Kharkov design Bureau for machine building imeni Morozova has completed factory testing of the new BTR-4МВ1, which is a deep processing of BTR-4 with the standards of NATO and experience in the use of technology in the area of ATO.

The press service of “Ukroboronprom” said that the main feature of the new armored personnel carrier became a modular approach in the construction of armor and exploding layers of armor. The designers believe that this will greatly enhance the security of the crew and the machine itself. The modular approach allows you to quickly install additional fuel tanks, floats or reinforce armor.

The APC received a new front with an effective tilt, and enhanced protection to enemy projectiles more likely to rebound. The driver provided a panoramic view using the five triplexes. Installed a digital system for 360 degree cameras, which “see” day and night.

For the crew and troops installed new chairs with protection from the explosions, a new air conditioning system and heating.