Home / policy / In Khabarovsk, on leaving the house detained the participant of protest actions 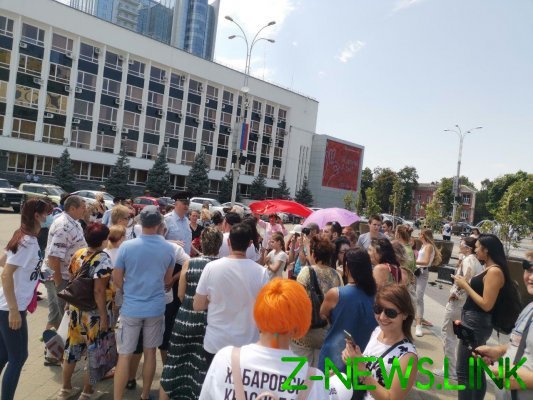 In Khabarovsk have detained the participant of protest actions Andrew Dudinka, reports “OVD-info”. The man managed to record and upload to Instagram a video with his detention. In the video Dudenwk says that out of the house and got into a taxi, when the car was approached by police. At first the police officer said that the car should be checked for theft.

Then the police officer says that on July 23 Dudenwk “Illegally participated in a mass event,” which took place on Lenin square, and asks Dudinka to get out of the car and walk to the patrol car. At first the man refused to get out of the car, requiring the police to present the agenda, however, apparently, in the end, he was still detained.

In Khabarovsk, daily from July 11, are large-scale spontaneous rallies and marches. People are unhappy with the arrest of the former head of the region Sergey Furgala, who is suspected of murder 15 years ago. Vladimir Putin dismissed Furgala with the phrase “in connection with loss of trust”, appointed acting head of the region, his fellow party member Mikhail Degtyarev. However, the festival is also not much. The degree of discontent grew after Degtyarev said that the organization of the meetings involved some foreign nationals who are “rocking” the situation in the region.

Earlier for participation in the protests, the courts have fined MP from the Communist party Sergey Ilyin and the Secretary of the Khabarovsk branch of the libertarian party Artem Mozgov. Reports are filed on other activists. Moreover, the administrative detention for 8 days got a driver “Fullmobile” Rostislav Buryak on charges of obstructing traffic on the protests.