Home / INCREDIBLE / In Japan, sounding the alarm over extinction of fossil animals

In Japan, sounding the alarm over extinction of fossil animals 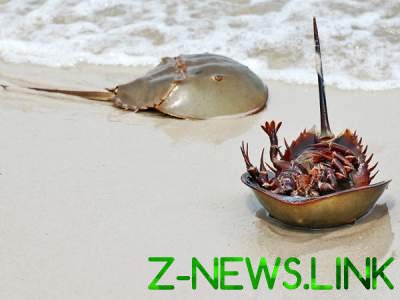 Experts warn about mass death fossil animal, which retains its appearance 450 million years and survived the Permian extinction, during which 95% of the animals were destroyed.

Horseshoe crabs belong to the species arthropods and got its name for spoorthy tail. Over the past century, they have retained their appearance and have experienced a wide variety of types, for this reason received the nickname living fossil. The average lifespan of these creatures is about 20 years, and oviposition have to 9-12 year of life. From year to year, they crawled to the shores of Japan to continue their own kind, died about 50-60 individuals of two thousand and accumulated on the shore.

However, the past year has reduced the population of these animals 10 times. In India also observed similar phenomena.
Given the fact that swordsmen and so not enough, this reduction of life threatens their existence in the future.

At this stage scientists don’t know what caused such a high mortality among these animals. There is the assumption that human activity disrupts the usual habitat of horseshoe crabs.