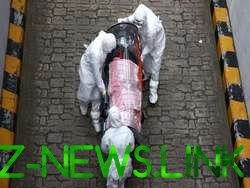 Large scale epidemic of the coronavirus COVID-19 in Italy is due to the fact that the virus entered the country at the beginning of the winter, but to detect it in the early stages prevented the outbreak. In an interview with RBC said the head of the Department of infectious diseases in the Italian Higher Institute of health, scientific Advisor to the government of Italy Giovanni CAREC.

“In most cases COVID-19 occurs in patients in the form of light, and therefore, its symptoms are easily confused with flu symptoms. Only when we began to face severe cases, accompanied by pneumonia, it became clear that we are dealing with something different,” he said.

CAREC has suggested that the virus could get to Italy in mid-January, but the first official case of the disease was revealed on 20 February. “That is the moment when we first found the virus and started to realize his danger, the epidemic has already gone too far”, — concluded the scientist.

Italy — third in the number of diagnosed cases country in the world (almost 200 thousand, behind USA and Spain). In the last week, the authorities fix the slowdown in the spread of the virus in the country. 20 April for the first time since the beginning of the epidemic total number of infected in Italy fell compared to the previous day — the basic factor of reproduction of the virus fell below the unit. “In recent weeks the rate of infection has slowed, and, according to our forecasts, this trend will continue in the coming months,” said CAREC.

The health system is able to cope with the flow of patients, assured CAREC. “We have built special hospitals for patients infected COVID-19, and all who have at least the symptoms of coronavirus are placed there. Since the beginning of the crisis the number of beds in intensive care units has increased by 50%”, — said the epidemiologist.

On 26 April, the authorities announced the lifting of the restrictions, may 4, and the transition to the “second phase” of the epidemic. In particular, open parks, and restaurants can sell food to take away. Under the ban will remain public events and many public places. More businesses, including retail outlets, will open in June. “We can’t afford to live with strict quarantine for longer than the next couple of months. Otherwise, from the virus we may get, but will face the threat of impoverishment,” — says CAREC.

The threat of the second wave of the virus

Although the effect of economic factors the Italian authorities are forced to mitigate the quarantine, such breaks create the risk of new lesions COVID-19, an expert has warned. “To avoid a massive second wave, the government will need to constantly remind people about the importance of respecting social distances,” he said.

On a separate note, in his opinion, should be paid to the question of control over the movement of citizens within Italy and to minimize the risk of transfer of virus from the North to the South of the country. “If people from the Northern regions will bring the virus to the South, this can cause great difficulties, especially as the health care system in the South prepared for a worse epidemic than the more affluent North” — he explained. Doctors and hospitals in the field you want as quickly as possible to capture new infections, to suppress potential foci of epidemic, added CAREC.

According to 28 апрhttps://lab24.ilsole24ore.com/coronavirus/en/Yale, in the Lombardy region (the epicenter of the spread of the virus) all the time the virus is diagnosed in more than 74 thousand people, and among regions of the South is leading the Campaign, where the diagnosed cases of about 4.3 thousand

Likely that to normal life in Italy and other countries, people will be able to return only with the advent of vaccines, the development of which could take a year, if not more, says CAREC. Up to this point the citizens have to take precautions, including keeping social distance.

“We will have to live with the virus and learn to respect him: this is a very dangerous guy,” said the Italian scientist. Even in Italy, which became one of the centers of the pandemic, the majority of the population still have not acquired immunity to the virus that creates the risk of new foci of the disease.

“In the near future we plan to deploy a large-scale system tests that will show the percentage of the population positive for COVID-19 based on serology (blood serum). Meanwhile, according to rough estimates, the epicenter of the epidemic in the North percentage of the population with immunity may reach 30-40% in other affected regions, about 10% in the rest of the country — from zero to a few percent,” — said the scientist. “If we take the figure for Italy as a whole, the proportion of people with immunity well below 10%. To herd immunity, we are still very far”, — he explained.

Yet the best you can hope for in the short term, is to develop more effective treatments for coronavirus, says CAREC. According to him, Italy already tested different drugs and procedures used to treat patients, but have not yet been studies. “We are talking about a whole variety of therapies: these antiviral drugs, and immunomodulators, and other medications. For example, we use heparin to prevent blood clots in the lungs,” explained the scientist.

According to him, the first proven treatment methods will be revealed a few months later. “Further, if we can prove the use of medication that is already used against other diseases, then almost immediately will be able to apply it widely. If it’s some kind of new medication, it is a more complicated process,” said CAREC.

Scientific Advisor of the Italian authorities Giovanni CAREC believes that the world health organization (who) could have used to encourage other countries to take measures to stop the spread of coronavirus. “Who’s a little too late with the announcement of an alarm due to the pandemic,” he said.

On 15 April, the President of the United States Donald trump decided to suspend contributions to the who budget, explaining that the organization “failed in its primary responsibility and should be held responsible”. According to trump, the organization’s actions contributed to “misinformation” about China’s coronavirus, which most likely led to a larger outbreak COVID-19, than it could be otherwise. USA was the largest donor to the who and brought $ 500 million annually. In Russia the decision trump called the attempt to find “blame” for the spread of the virus and to prove his “innocence”.