Home / policy / In Ingushetia disbanded battalion of the PPP, who stood on the side of the protesters

In Ingushetia disbanded battalion of the PPP, who stood on the side of the protesters 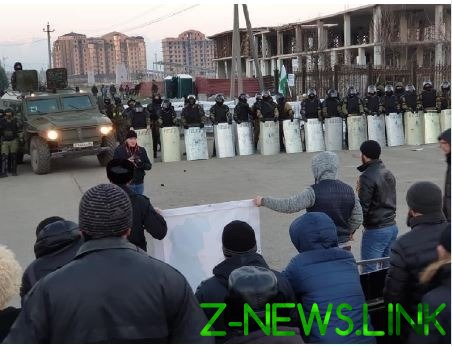 In Ingushetia disbanded battalion PPP, who during a rally in Magas on March 26 sided with the protesters, told the lawyer and former press Secretary of the head of the Republic Yunus-Bek Yevkurov Kaloy ahilgov, writes “MBH media”.

According to him, was dismissed 19 employees of a separate battalion on the administrative borders of Ingushetia.

“It all happened because of the history when they have not fulfilled the decree to disperse the protesters. Casualties among the protesters was not due to this regiment, which gave a large number of asguardian to go to the territory, where were the protesters,” said ahilgov.

On March 26, the residents of Ingushetia, came to the rally as a sign of disagreement from agreement on administrative border with Chechnya, and also with the provisions of the new wording of the local law on the referendum.

In the fall of 2018, an agreement was signed on the transfer of part of the land of Ingushetia, Chechnya, between the head of the Republic Yunus — Bek Yevkurov and Ramzan Kadyrov. Under this agreement Ingushetia received from Chechnya, part of the Nadterechny district, instead of Ingushetia handed over to the Chechen territory on the border with the Malgobek district, the site of the Sunzha district. Then in Ingushetia began mass protests.

See also:  The leaders of "Norman Quartet" was supported by another ceasefire in the Donbas