Home / Video news / In India, a four-meter Python had swallowed a dog. Video

In India, a four-meter Python had swallowed a dog. Video 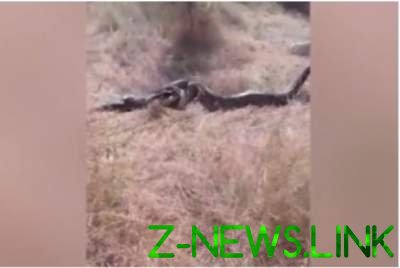 The giant reptile spotted near cow barn in the village Umarga in India.

Four-metre Python caught in the area of the Indian city of Udaipur, Rajasthan, spat out the remains of the dog.

The giant reptile spotted near cow barn in the village Umarga. Local residents appealed for help in a non-profit organization save wild animals and nature.

Rescuers raised the Python, then take him to a safe place, but the reptile began to choke. Employees of the organization were afraid that the Python would die, but he managed to push out from the jaws of its prey.

See also:  In Kiev, the security forces "tied" to the Russian spy. Video

“Reptile barely moved. Usually pythons stretch its jaws to swallow large animals such as goats or dogs, but they are not able to digest them and may choke and die,” explained the President of the Society of wildlife rescue and nature Sohan Singh of Cidade. According to him, this is what happens when the reptile is starving for many days or preparing for hibernation.

See also:  The killer in Kharkov was shot from a machine car. Video

The rescue operation lasted about an hour. The Python was taken to a nature Park Baggara and released.