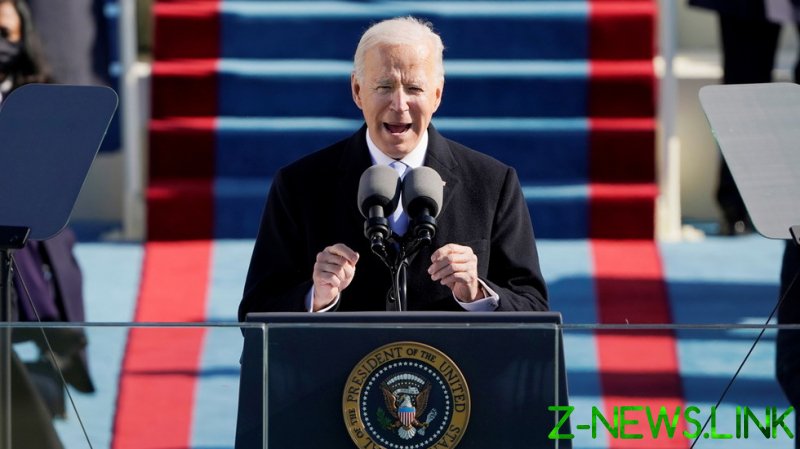 “This is our historic moment of crisis and challenge, and unity is the way forward,” Biden said, after being sworn in as the 46th US president shortly after noon on Wednesday. He urged Americans to “start afresh” by listening, seeing, hearing, and respecting one another.

We must reject the culture in which facts themselves are manipulated and even manufactured.

Urging those who didn’t support him to “take a measure of me and my heart,” Biden said that if they still disagree, “so be it. That’s democracy. That’s America.”

Biden urged Americans to “end this uncivil war that pits red against blue,” but left no doubt what side he considered righteous and which illegitimate, by denouncing the “riotous mob” that tried to “overthrow democracy” at the Capitol two weeks prior.

“There is truth and there are lies, lies told for power and for profit,” and his administration will have to “defend the truth and defeat the lies,” Biden told the socially distanced crowd of politicians on the Capitol’s western steps, overlooking a sea of flags planted on the locked-down National Mall behind them.

Warning that Americans will need “all our strength to persevere through this dark winter” of the pandemic, which he called the “toughest and deadliest period” of Covid-19, Biden said Americans “must set aside politics and finally face this pandemic as one nation.”

Asking for a moment of silence to honor the 400,000 Americans whose deaths have been attributed to the virus, Biden said the best way to honor them was “by becoming the people and the nation we know we can and should be.”