Home / WORLD / In her new book, ‘White Fragility’ author DiAngelo claims ‘nice’ white people are the worst racists and attacks those who disagree

In her new book, ‘White Fragility’ author DiAngelo claims ‘nice’ white people are the worst racists and attacks those who disagree 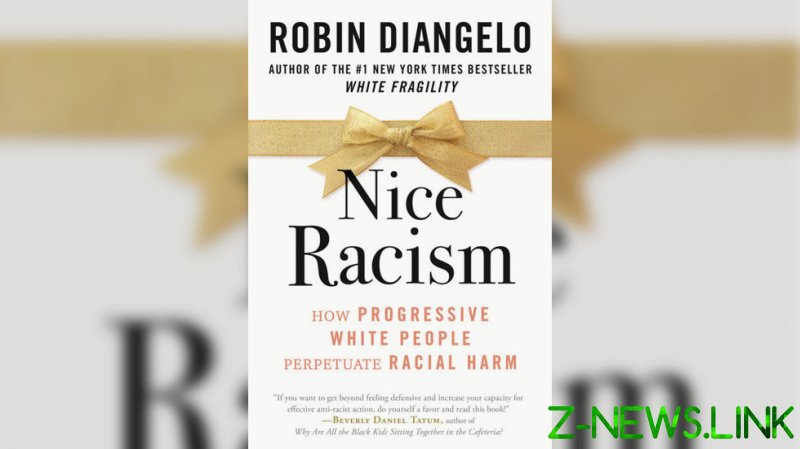 Having successfully turned an extended online article into a New York Times bestseller, introduced a previously oblivious audience to the idea of everyday ‘white supremacy’ and ‘white fragility’, and made it clear that white women crying is something we should avoid at all costs, Robin DiAngelo’s managed to strike gold in the racism business.

Who can begrudge her? In her new book, ‘Nice Racism: How Progessive White People Perpetuate Racial Harm’ (why do these academics always give the entire game away in the title?), DiAngelo relates the miserable poverty she endured when growing up, living with her single mother and sisters in their car at times, as they struggled to find somewhere to live.

It explains a lot. Why she identifies with the outsiders, why her childhood lack of hygiene, rotting teeth, and smell, and the way friends saw her family – “‘What’s wrong with them?’ I stopped, riveted. What would be her mother’s answer? What was wrong with us? The mother held her finger to her lips and whispered, ‘Shhh, they’re poor.’” – equipped her with a deep sense of social justice. And how that manifested into an obsession with race.

She doesn’t shy away from her own racism, which, of course, is all part of her allure. She recounts her experience of a restaurant meal with a companion, pre-enlightenment, where the other couple at their table were black. In order to prove her credentials as non-racist, she spent the evening regaling her dinner companions with sneering tales of her racist family, only realising much later how tone deaf she had been and how she must have come across to two people she had never met before.

She understood that her attempt to convince the couple she was not racist was actually kinda racist. This was the birth of her circular argument based on several huge assumptions: the first that all white people are inherently racist, and the second, that the more they try to disprove this reality, the more racist they reveal themselves to be.

If you were expecting this lightbulb moment to have resulted in some degree of humility in DiAngelo’s later life, then you’d be disappointed. It’s clear from the outset that anyone who dares question her is simply the worst sort of racist – they just don’t know it. From her position as the darling of critical race theorists in the US, and with a second book deal, DiAngelo shows she possesses one of the less engaging character traits of social justice warriors by attacking anyone she comes across who fails to swallow her worldview unquestioningly.

‘Bob’ and ‘Sue’ were hauled over the coals retrospectively when they approached DiAngelo after a presentation titled ‘What’s Problematic About Individualism?’, which argued that “white insistence on individualism in discussions of race in particular prevents cross-racial understanding and denies the salience of race in our lives”.

Sue’s crime was to reveal that “Bob and I think we should all just see each other as individuals”. So they disagreed with DiAngelo. Fair enough, you would think.

It was clearly a struggle for the author-warrior not to scream in their faces, “WHAT PART OF MY INFALLIBILITY DO YOU NOT GET, YOU FREAKING MORONS?” Instead, she took her revenge in ‘Nice Racism’ by relating the encounter with these plebs in detail to show the struggle she faces when stupid racists fail to concur with everything she says at her overpriced gabfests. It’s condescension as a default.

Any white person who speaks, acts, gestures or just exists in a way that DiAngelo doesn’t like is fair game. And just a tip: never send her an email. Because she’ll stew over its contents, pick a moment to exact revenge and then go to town. She chooses to devote a whole chapter to dismantling one from a 75-year-old white man who not only dared to criticise her after hearing her give a radio interview, but had the temerity to call her “silly”. No matter that he wrote of being anti-racist since he was 12 years old – a claim the author pooh-poohs – she decides he was clearly a racist anyway and, even worse, guilty of both “mansplaining” and “whitesplaining”.

Then there’s the London cab driver who had the bad luck to land DiAngelo as a passenger and to ask why she was visiting the English capital. When she told him she was being interviewed by the BBC about her book ‘White Fragility: Why It’s So Hard For White People to Talk About Racism’, he complained he was sick of people calling him a racist.

How lucky he was to have St Robin in the back of his cab so she could recount her patronising response to his obvious – to her, at least – lack of racial enlightenment in her follow-up book. Oh, the poor dumb brute!

There’s more of this on every page, turning what is essentially a valid proposition into a tedious, vengeful vanity project.

The idea that many ‘nice’ people who self-identify as ‘anti-racist’ are exactly the opposite is a good angle, particularly when the person suggesting this is, herself, up to her neck in implanting feelings of racist guilt and shame into the minds of these poor saps only to reveal she really can’t help them anyway. Once a racist, always a racist.

DiAngelo has made a very tidy industry out of racism, workshopping and co-facilitating around the world, promoting herself as the one true, very expensive white voice qualified to speak on racism, using the full linguistic armoury and pre-cooked assumptions at the disposal of the modern liberal warrior.

It’s all there in ‘Nice Racism’. The taken-for-granted declarations that race, like gender, is a social construct, that intersectionality is the basis of everyone’s identity, that white people are all – to a man, woman and child – innately racist, and that to deny it is in itself proof of that racism.

Her latest work is a bit like what used to be known in the music business as second-album syndrome. When a debut album proved a surprise soaraway hit, greedy record execs would insist on a rapid follow-up to ride the slipstream of success of the first effort. So tracks not good enough for the launch album would hastily be lumped together with cover songs, instrumentals and other filler material to comprise a complete second release.

This is what DiAngelo has done. Alongside the revolutionary concept of “white fragility” she introduced in her debut, which were seized upon by those in the identity-politics business and the liberal media, she’s added to the lexicon of race identity with BIPOC (black, indigenous, people of colour), ridiculed ethno-tourists, New Age spiritualists and London taxi drivers, and turned on the very people who comprise her devoted audience.

DiAngelo stated her intellectual case in ‘White Fragility’ and there’s nothing to add to that position in ‘Nice Racism’. As she relentlessly savages those who idolise her, it’s like watching a shark devour its young. While you understand the need for survival, it seems unnecessarily cruel all the same.