‘In good shape but inappropriate’: Canadian MP scolded for walking around NAKED during official session 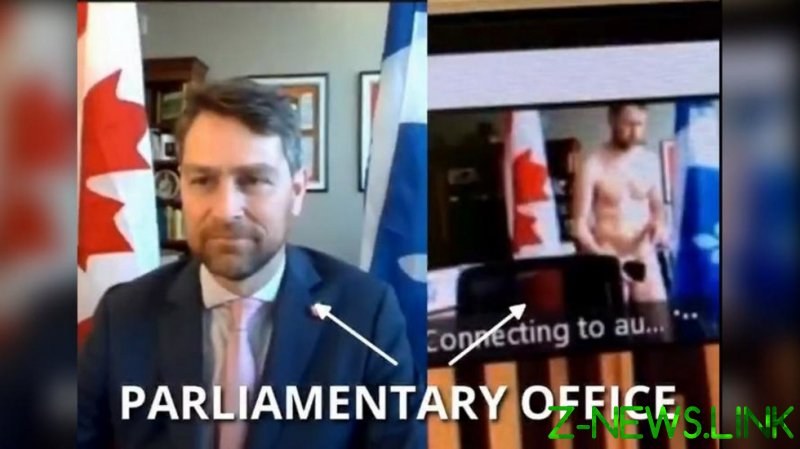 “Perhaps remind the members, especially the male members, that suits and ties are called for,” MP Claude Debellefeuille of the Bloc-Quebecois said on Wednesday, raising a point of order. She was referring to her colleague William Amos of the ruling Liberal party, who was captured on the stream inside his office, completely naked.

Noting that Amos was “in very good shape,” Debellefeuille nonetheless said he should be “reminded of what is appropriate and to control his camera.”

Amos, 46, represents Quebec’s Pontiac riding, just across the river from the Canadian capital of Ottawa. He was first elected in 2015.

“This was an unfortunate error. My video was accidentally turned on as I was changing into my work clothes after going for a jog. I sincerely apologize to my colleagues in the House of Commons for this unintentional distraction,” he said in a statement. “Obviously, it was an honest mistake and it won’t happen again.”

The screencaps from the unfortunate stream show Amos inside his office, during the daily Question Period when members of the parliament ask questions from the cabinet and PM Justin Trudeau.

Amos’s unfortunate state of deshabille was not inflicted on the general public, as he was not speaking during the Question Period, but only on the MPs and their staff watching the internal feed.

He is unlikely to face punishment from Liberal whip Mark Holland, who told CTV he was “utterly mortified” by the incident but doubted there was any ill intent involved.

“This is a warning to everybody. You’ve got to really always assume that [the] camera is on and be very careful any time you wander anywhere near that camera that you’re dressed appropriately,” he told the broadcaster.