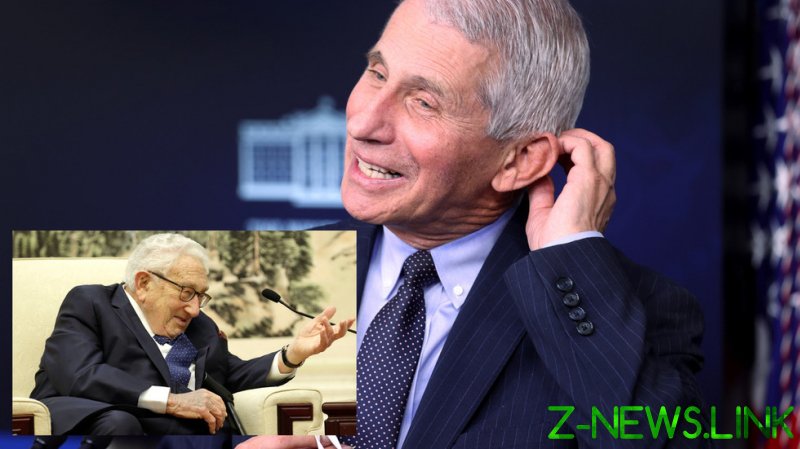 The Dan David Foundation, which is based out of Tel Aviv University and counts such dubious luminaries as war criminal Henry Kissinger on its board of directors, has gifted $1 million to Fauci for “courageously defending science in the face of uninformed opposition during the challenging Covid crisis.”

It’s not clear from whence this “uninformed opposition” emerged – indeed, one of Fauci’s most vocal opponents has been Dr. Anthony Fauci, who spoke up against the wearing of face masks and other mandates just weeks before he came out swinging in support of such rules.

Presumably, though, the Dan David Foundation was referring to popular opposition to that version of science that more closely resembles religious dogma. Fauci’s smug, self-satisfied and above all brittle variant of “science” cannot be questioned, lest it shatter into a million pieces, and the man’s stubborn use of thought-terminating clichés makes him resemble more of a cult leader than a public health official.

The Dan David Foundation has quite a history of honoring dodgy figures, and it’s no surprise to find them promoting dogmatic Fauci-flavored science over the true scientific method. Wikipedia co-founder and famed fabulist Jimmy Wales was among its prize-winners in 2015, gifted the $1 million treasure for his work in the field of “the Information Revolution.”

While Wales generally defends his truth-averse creation by waxing poetic about a world “in which every person is given free access to the sum of all human knowledge,” Wikipedia has instead mounted a full frontal assault on human knowledge, seeking to destroy all that which does not conform to its founder’s preferred version of reality. Despite presenting itself as an encyclopedia, Wikipedia even admits it does not traffic in “truth,” but merely “verifiability,” and the site’s disclaimer notes “that nothing found here has necessarily been reviewed by people with the expertise required to provide you with complete, accurate or reliable information.”

Fauci is in good company at the Dan David Foundation. Just as the good doctor has done for Big Pharma fraudsters like Pfizer and GlaxoSmithKline, Wales has taken great care to treat Israel and the many “alternative facts” with which it shrouds its own crimes with kid gloves, ensuring the average Wikipedia user doesn’t learn the truth about the horrific oppression Tel Aviv deals out to occupied Palestine on a daily basis.

The Israeli government and its private-sector collaborators have long operated ideologically-driven editing cells, a massive violation of Wikipedia’s rules but one whose owners straight-facedly describe as merely an effort to make Wikipedia “balanced and Zionist in nature.” Many of the Israelis who operate these editing initiatives receive valuable rewards from their government, and some even rise to plum positions therein – Ayelet Shaked became the Israeli Minister of Justice after putting together the pro-(illegal)-settlement Yesha Council’s editing initiative, and Naftali Bennett rose to Education Minister not long after serving in that same organization.

As a Dan David Foundation winner, Fauci will also be mingling with Ezekiel Emanuel, the oncologist who infamously devised the notion of rationing healthcare – “death panels” – and suggested humans should aspire to live to no more than 75 years of age. He won the prize in 2018 for his work as “pioneer in the field of end-of-life care.” You can’t make this stuff up.

Speaking of “end-of-life care,” the Foundation also counted Tony Blair, the former UK PM who joined US President George W. Bush in his illegal and monstrous assault on Iraq, among its winners in 2009. Blair’s bio deems him “one of the most outstanding statesmen of our era,” presumably with a straight face. In his post-PM career, Blair has traveled around giving expensive speeches to repressive dictators and counseling them on how best to extract themselves from pesky human rights charges (see: Kazakhstan, Azerbaijan, UAE and Israel itself), while Wales follows him around like a lovesick puppy, setting up Wikipedia projects for aforementioned dictators. After all, nothing says “democratic” like a “people’s encyclopedia” run like a Ministry of Truth!

And what gathering of ruling class ghouls would be complete without the World Economic Forum’s Klaus Schwab? The real-life Bond villain won the Dan David Prize in 2004 for “his significant contribution in fostering international dialogue and activism to resolve some of the world’s greatest issues.” So what if the corporations that comprise his little organization caused a whole bunch more “issues” in the mean time? Can’t make an omelette without breaking a few eggs!

As a central figure in the US medical establishment for four decades who’s personally presided over the declining life expectancy of its people, Fauci fits perfectly into the malevolent ruling class soup cooked up by the Dan David Foundation. Wikipedia made a formal alliance with the World Health Organization last year, supposedly part of an effort to fight “disinformation” related to the novel coronavirus epidemic, and Wales has long considered his website a prize weapon in the armory of modern medicine against what he calls “lunatic charlatans” – those medical practitioners who dare to dream that cures may exist outside the money-paved halls of Big Pharma.

And Fauci himself is a true believer in the wide world of orthodox pharmaceutical treatments, unwilling to concede any validity on the part of natural medicine and determined to come out of the Covid-19 pandemic looking good – no matter how many people have to die for his public relations campaign.

In reality, Fauci has done a substandard job throughout his tenure, whether it was denying access to a potentially lifesaving antibacterial drug that could have saved the lives of AIDS patients infected with a killer variant of pneumonia or pushing a dangerous swine flu vaccine for an epidemic that turned out to be largely imaginary. Unfortunately for all of humanity subject to his policymaking decisions, he’ll fit right in with Kissinger and his sorry array of pals.