Home / WORLD / In Germany recognized the existence of a third sex

In Germany recognized the existence of a third sex 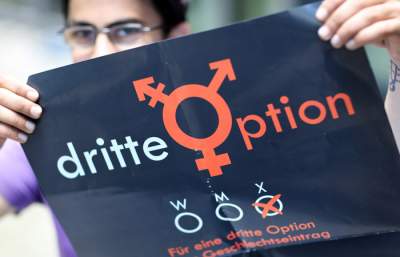 The main innovation of the bill will be the appearance of the column “other”.

The government of Germany has approved the bill according to which the bodies of registration of acts of civil status will soon be able to officially record a third gender in birth certificates.

The main innovation of the bill will be the appearance of the column “other” in relation to sex, which can choose a intersex – people who do not belong to the male or female sex.

See also:  Do you know the authors of the Russian horror in the face? (THIRD TEST)

The column “other” will be used along with the existing still counts “male” and “female gender”.

Until now the only option for people undecided with Paul, was not to specify gender at all. This opportunity will continue in the future. In addition, under the bill, citizens will be able to change at will, the previously reported gender, and your name.

Innovation positively commented the Minister of justice of Germany Katarina barley. “A single person cannot be discriminated against for her sexual identity,” said barli.