In Germany in a dozen cities held demonstrations against the quarantine 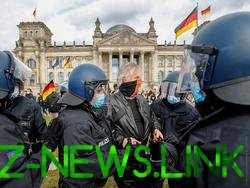 In Germany on Saturday, may 16, was a new series of protests against restrictive measures due to pandemic coronavirus. The shares are held in Berlin, Munich (Bayern), Dortmund (North Rhine — Westphalia), Stuttgart (Baden-württemberg) and a number of cities in Germany. Often in one locality held multiple protest events: in Munich, they claimed about ten.

According to the newspaper Süddeutsche Zeitung, the specificity lies in the fact that the protest is gaining momentum against the background of gradual refusal of the injunction and the implementation of the second stage to mitigate them.

About 20 of the demonstrations in Berlin

The Berlin police gave permission to hold in the city about 20 demonstrations. Based on the epidemiological requirements in each of them was enshrined in a special place, and the number of participants should not exceed 50. The number of reported sites: the Rosa Luxemburg square in the Mitte district, the area in front of the Reichstag building, where the plenary hall of the Bundestag and Alexanderplatz. In contrast to the past weeks this Saturday in the capital, according to the Agency dpa, managed to avoid serious clashes with the police.

Provisionally detained about 200 people — some of them for identification. Two police officers received minor injuries. In just compliance with social distancing and security watched about 1000 employees of law enforcement bodies. 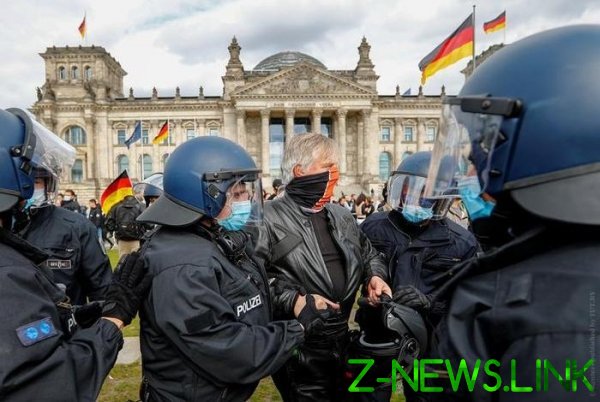 Shares in Stuttgart and Munich

In Stuttgart, the number of participants was limited to 5000, all those present were ordered to wear masks. After reaching the acceptable threshold, the protesters were not admitted to Kostetskiy meadow (Cannstatter Wasen) — the Playground, where they usually held beer festivals.

At the same time, both in Berlin and in Stuttgart a number of organizations of the left orientation held the “antidemocracy” — action against the so-called “avidities” radical, principled opponents of vaccination and conspiracy theorists.

In Munich, the demonstration took place on Theresienwiese (Theresienwiese), where usually celebrate Oktoberfest. The area was fenced around the perimeter, to penetrate behind the barricades allowed only 1000 people. The calls of the police to prevent the crowds, announced over the loudspeaker, were met with disapproving shouts. One of the demonstrators responded by shouting that “next week it will gather 10 thousand people.” Some of the protesters brought with them placards. The inscription on one of them read: “Freedom instead of coercion.” Someone came in a mask, on which was embroidered: “We are silenced”. The action lasted two hours — so much time given to it the city authorities.

Shortly before the beginning of the rallies, Prime Minister of North Rhine — Westphalia Armin Lachet (Armin Laschet), the most populous state of Germany with nearly 18 million inhabitants — with the understanding expressed about the protests.

“It’s perfectly legal. Actually there is nothing unusual in the fact that people go to demonstrations in a situation when the most serious restriction of fundamental rights since the unification of Germany,” he told the newspaper Neue Osnabrücker Zeitung.

At the same time, he warned that in their own interests “this protest are trying to use the left and right-wing radicals, and also “reichsburger”, is banned in Germany the radical group.