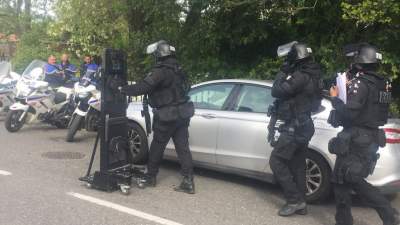 In France suspect it was a robbery gone bad.

In France, near Toulouse, in the commune of Blagnac, a man took a group of hostages in a tobacco shop.

According to the latest information in the thrall of an unknown six people – five visitors and the owner of the shop.

It is noted that when the place of events there arrived the police, the man threatened to open fire on them. He also asked the negotiator and said that he would kill the hostage if the police remove the cordon or go to the assault of the store.

See also:  In the North sea found a German submarine during the First world

18:45 there is evidence of the exchange of fire between the attacker and the police. The assailant asked the police about the negotiations.

French media, citing police sources, that the event is not considered as a terrorist attack. According to them, it’s most likely a robbery gone bad.