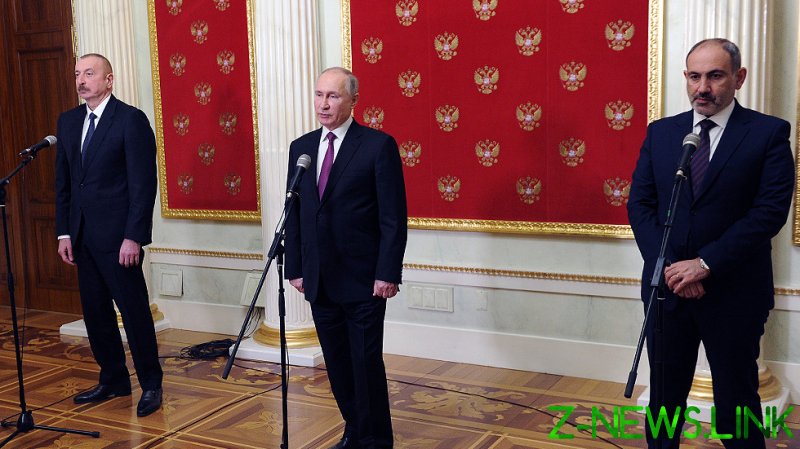 The four-hour discussion represented the first time Azerbaijan’s President Ilham Aliyev and Armenian Prime Minister Nikol Pashinyan had met face to face since the end of the six-week war, which concluded in a clear victory for Baku. Following the meeting, Putin revealed that a joint statement on the development of Karabakh had been signed by all three parties. Although not yet published, the Russian president explained that it includes steps to develop economic ties and infrastructure projects. One provision is said to allow for Armenia to be finally connected to the European rail network via Azerbaijani territory.

At the start of the trilateral talks, Aliyev and Pashinyan didn’t shake hands as they took their places around a table in the Kremlin. Before the discussions began, Putin made a statement noting the importance of determining “future steps” following November’s truce. He also revealed that 48,000 refugees had returned to Nagorno-Karabakh when the fighting was over, with an international humanitarian response center created to help restore heat and electricity, among other initiatives.

“We are grateful to you for responding to the invitation to jointly discuss the implementation of our trilateral agreement,” Putin said. “Russia values the partnership and good neighborly relations that bind our countries and people, so we followed the outbreak of the armed conflict with grave concern.”

Putin also thanked Baku and Yerevan for their “positive reception” to Moscow’s mediation efforts, “which were aimed at helping to stop the bloodshed.”

“The trilateral agreements are being consistently implemented,” he noted, before expressing the hope that the negotiations would progress “in a businesslike atmosphere” to “ensure lasting peace.”

After the meeting had finished, Putin revealed that the leaders had unanimously agreed that the truce was being adhered to, with all three parties, including the Russian peacekeepers, fulfilling their obligations. However, the discussion wasn’t wholly successful, with the Armenian PM noting that the parties had failed to see eye to eye on the matter of prisoners of war.

On November 9, Moscow oversaw a ceasefire between Yerevan and Baku that determined Azerbaijan could keep the areas of Nagorno-Karabakh it had regained control of during the conflict. Armenia agreed to withdraw from neighboring regions, and Russian peacekeeping troops were deployed to the contact line. The Russia-brokered agreement saved the Armenians from an almost guaranteed loss, with Pashinyan himself admitting the situation was dire.

The conflict between Yerevan and Baku in Nagorno-Karabakh re-escalated on September 27. The dispute between Azerbaijan and Armenia is decades old, with both countries believing they have legitimate claims to the territory. The region is internationally recognized as part of Azerbaijan, but is primarily populated by ethnic Armenians. Baku considers the enclave to be illegally occupied by Yerevan.