Home / WORLD / In final debate, Biden raised the stakes – and put himself right where Trump wanted him 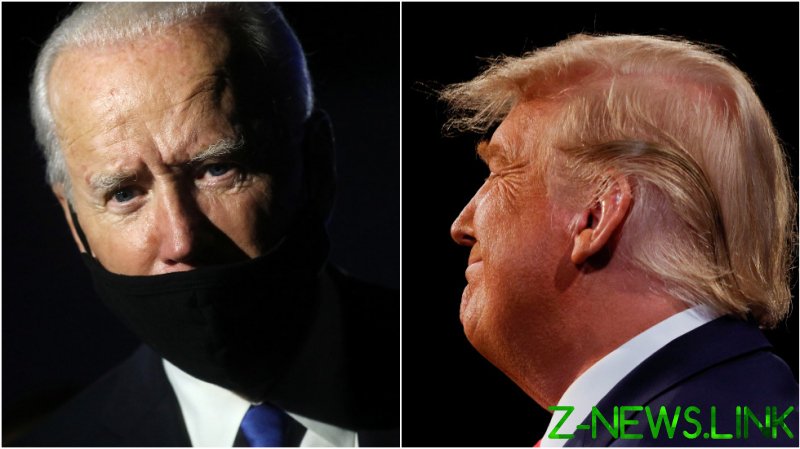 Thursday night’s second and last presidential debate in Tennessee went far more smoothly than the previous one. There was still plenty of emotional manipulation to go around, however. On at least three occasions, Biden changed the subject to start waxing worried about American families and how they were coping with the pandemic, economy, health insurance and so on. No doubt, these were focus-grouped by the best political consultants, but those are bold words coming from someone who spent almost half a century in the corridors of power.

Trump would not let Biden forget that, either, repeatedly hammering Barack Obama’s vice-president for having years to implement all these hopes and dreams he was promising, but failing to do so. When confronted with his record, Biden’s excuse was “we made mistakes.”

“Never interrupt your enemy when he’s making a mistake,” says a maxim attributed to Napoleon Bonaparte. Over the course of the night, Biden made several.

Biden’s first blunder was to admit he would shut down the country due to the Covid-19 pandemic, however much he tried to qualify it. Democrats have blamed Trump personally for every single coronavirus death, but Biden’s plan to deal with the virus amounted to what the Trump administration was doing now, only with national mask mandates, lockdowns, and throwing money at the problem.

Circling back to coronavirus relief later in the night – and trying to make it about race – Welker blamed the president for the inaction of Congress. Trump used the opportunity to argue that House Speaker Nancy Pelosi (D-California) has been holding up the aid. When Biden claimed that Pelosi’s HEROES Act is just waiting for Trump’s approval, Trump countered that it was a partisan “bailout” that would reward Democrats for lockdowns and rob US taxpayers to pay illegal immigrants, among other things.

Biden’s response? When immigration was brought up, he promised amnesty and “path to citizenship” to 11 million illegal immigrants within the first 100 days of his administration, the very issue Trump ran against in 2016!

Under fire by Trump about his role in the 1994 crime bill – another “mistake” – Biden made an emotional argument for decriminalizing drug abuse and abolishing “minimum mandatories” (that is, mandatory minimums) in sentencing.

Perhaps the worst blunder was Biden insisting that “the character of the country is on the ballot.” In his universe, informed by mainstream media coverage, Trump is the Bad Orange Man that can do no right and he is the one to restore “decency” to America.

“He called Mexican rapists, banned Muslims because they’re Muslims,” Biden insisted at one point. He also said Russia was “paying bounties to kill American soldiers in Afghanistan.” None of that is true.

At least he didn’t repeat the “fine people” lie this time, though he fumbled around with ‘Poor Boys’ (presumably the “Proud Boys”) and called Trump “a dog whistle about as big as a foghorn.”

Making this about character, however, allowed Trump to bring up Biden’s son Hunter and his shady business dealings overseas – a scandal the mainstream media has worked overtime to suppress. Biden’s response was to claim Hunter did nothing wrong, citing media reports, impeachment witnesses and “50 former national intelligence folks” who “said this is a Russian plant.“

“You mean the laptop is another Russia-Russia-Russia?” Trump asked, having brought up the ‘Russiagate’ hoax earlier in the evening as an example of how his campaign and presidency were unfairly targeted by Democrats.

“That’s exactly –” Biden started saying, as Trump cut him off with “Here we go again with Russia!”

Trump has the uncanny ability to force people’s true opinions and feelings out in the open. And so, months of Biden’s carefully worded statements and cagey qualifiers simply vanished on Thursday evening, and he told America how he really feels.

That’s actually understandable, considering that Biden is trying to ride the coattails of Barack Obama, four years after the fact. He kept doubling down on the policies from when he was VP, as if Americans are solidly behind them and Trump’s 2016 election was a glitch that shouldn’t have happened.

Biden, the Democratic Party and the mainstream media may believe that now, but within two years of Obama’s election Americans had elected a Republican Congress, and Trump came out of nowhere to defeat two powerful political dynasties – the Bushes and the Clintons – campaigning against Obama’s legacy.

Trump even told Biden at one point that the only reason he got involved in politics was “because of you.” Biden didn’t get it. And thereby hangs a tale.