Home / Video news / In England, the supporter had to replace the injured referee. Video

In England, the supporter had to replace the injured referee. Video 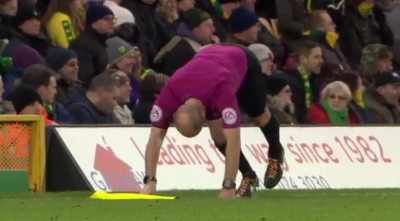 The man saved the match.

A fan of English football club Norwich was replaced by the reserve judge during a match of the 19th round of the championship against “Preston North End”.

Video of the incident published in Twitter-account team.

At the end of the match one of the line of the referees is injured and his place was taken by the fourth official, the replacement of which was not. The main referee Tim Robinson took the players off the field and was going to interrupt the game, but one of the fans, “Norwich” volunteered to replace the reserve arbitrator.

With the approval of the chief judge, the fan took the place of the fourth referee. In jeans and jacket, he worked a little more than ten minutes, which announced a replacement, and showed 10 minutes of added time.

The meeting ended with the score 1:1. Norwich is on the 14th place in standings of the championship, the team has 24 points. “Preston North End” located on the 13th place with 26 points.