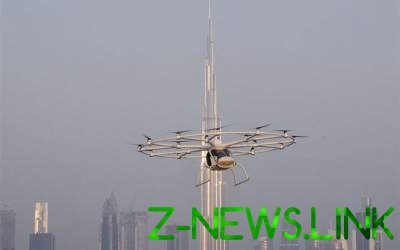 The prototype already made its first flight over the city.

In the Emirate of Dubai passed the first test flights of unmanned flying taxi, created by the German company Volocopter.

The device resembles a small double cabin which is surrounded by a Hoop with 18 propellers.

The prototype already made its first flight over the city. While the tests are conducted without a human on Board, but the test was attended by crown Prince of Dubai Hamdan bin Mohammed, who sat inside the machine on the ground. In test mode, Volocopter crossed about 200 meters and stay in the air more than 5 minutes.

The current version of the Volocopter two seats able to stay in the air for about 30 minutes when the flight speed is 50 kilometers per hour, also stated the possibility of dispersal to 100 kilometers per hour. Nine independent batteries support fast charging to 100% in two hours.

In case of emergencies, the phone offers replacement batteries, two propellers and a parachute.