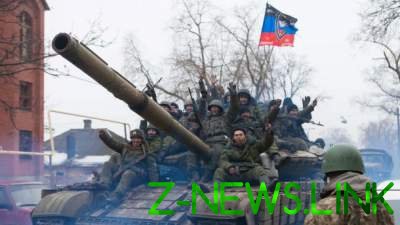 The militants moved South-West from Ozeryanovki a backup group of two tanks and two BMP-2.

The commanders of the militants “DNR” fear the onset of Armed forces of Ukraine “bleed” of Gorlovka. Therefore, the militants moved South-West from Ozeryanovki a backup group of two tanks and two BMP-2.

About this on his page in Facebook wrote the Ukrainian MP and the head of group “Information resistance” Dmitry Timchuk.

He added that the South-taped also recorded masked militants of 4 units of 100-mm anti-tank MT-12 “rapier”.

In addition, according to Tymchuk, the militants hidden artillery deploy funds in the interest of the units of the “14-th battalion of territorial defense” and “2nd motorized rifle brigade”, operating along the bakhmutka.

See also:  How to get rid of "delayed onset muscle soreness" after sports

In particular, on the Eastern edge of Kadievka, outside the city, closer to Vesnyanka militants in landings launched a 4-gun battery 122-mm guns, howitzers of type D-330A. Guns are carefully camouflaged.

Presumably, this battery “insures” (if necessary) advanced positions of occupants in bakhmutskaya track. According to unconfirmed reports, similar artportalen invaders deployed closer to the Country, – is spoken in the message of the head of “Information resistance”.

See also:  In the center of Kiev have stepped up security

Timchuk also noted that the command “first army corps of the DPR” is confident that the development “offensive” in the area of Gorlovka, the Ukrainian command is preparing “an armed provocation to the South of Dokuchaevsk or in the area East of Volnovakha”.

So, one of the newly formed battalions of “5-th separate motorized rifle brigade” will take a new position between Stelai and Telmanovo to strengthen and seal the combat formations of the invaders in that direction.