Home / Society / In Dnipropetrovsk, the dog tore the woman

In Dnipropetrovsk, the dog tore the woman 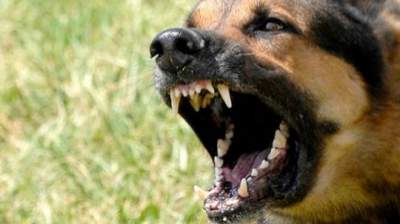 The incident occurred in the early morning.

A resident of the village went to work. Suddenly she was attacked by two neighborhood dogs. From the cruel bites the woman died on the spot, right in front of his yard. Witnesses claim to have survived terrible wounds, the chances of the victim was not. Dogs literally scalped his victim and ate her right leg below the knee.

A few minutes later the same road was another 54-year-old woman. Dog attacked her, the woman began to fight back the bag. The noise ran out, the man with the stick, which beat off neighbor dogs. Now the victim is in shock and is in hospital. As told by the doctors, on the hands and feet of women — more than a dozen deep wounds. After the fright, she can’t talk about what happened. After the patient recovers from the bites, it will work psychotherapists.

The dogs attacked the female shepherd mixed pit bull. Their owners refuse to admit their guilt. They claim that the animals did not show the slightest aggression. The day the dogs are in a cage, and at night running around the yard. Without help they wouldn’t have gotten out on the street, I’m sure the hostess. Most likely someone opened the gate and the dogs rushed out from the yard.

In the police case classified as an accident, there is no evidence that the owners incited the dogs to passers-by especially. So pet owners will get off with just a fine.

However, experts disagree with this. Canine Vitaliy Antonov says that the owners should be responsible for their Pets. If the dog is trained to guard she is, in a sense, is a weapon.

Residents of the village where the tragedy occurred, scared and ready to take up arms.

See also: Christmas and New year: how the Ukrainians will rest

— If we see somewhere the dogs will shoot them. I agree even to pay fines, they say.