In China for the first time conducted a head transplant 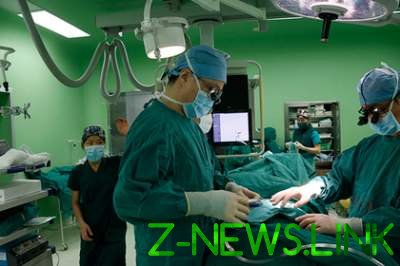 The operation lasted about 18 hours.

The world’s first transplant of a human head were carried out on the corpse in China during the 18-hour operation. During the procedure managed to restore the spine, nerves and blood vessels. This publication reports The Telegraph.

On successful head transplant was announced by the Italian neurosurgeon Sergio canavero (Sergio Canavero) at a press conference in Vienna. The operation was carried out by a team from Harbin medical University (China), headed by Dr. Ren Xiaoping (Xiaoping Ren). According to Canavero, transplanting the head of a living person will be held in the near future.

In September 2016, the neurosurgeon has published a video, which shows animals (mouse and dog), survived a trial transplant of the head. In the experiment, the animals were used polyethylene glycol, which had been imposed in the affected areas of the spinal cord and contributed to the restoration of connections between thousands of neurons.

Read also: Swedes learned how to print human organs on a 3D printer

Operation on the body was held in preparation to transplant a human head of the Russian programmer who suffer from neurodegenerative diseases. However, there is no conclusive evidence that the operation may be feasible.