In Charlottesville held a mass March of “white nationalists” 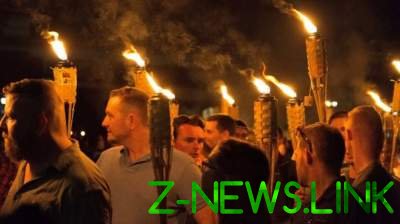 Far-right organization made the new action.

Far right “white nationalist” again took to the streets of the American city of Charlottesville.

According to information, a short rally with torches was held at the initiative of the far-right activist Richard Spencer. On published the videos, hear the men chanting, “don’t replace” and “We will return”. In total, the rally was attended by 40-50 people.

News on topic: UN chief urged to fight racism after the tragedy in Charlottesville
In video from the rally, which was published by Spencer, he said that Charlottesville has become a symbol of suppression of freedom of speech and destruction of historical monuments.

“A group of identically dressed people holding torches and chanting: “the US South will rise again” and “Russia is our friend”, – stated in the message.

Another participant right-wing said she was going to “presenting the interests of white Americans,” and criticized local community and the media. According to police, the group dispersed at 20:00 local time (03:00 Kiev time).

Earlier it was reported that the monument to General Robert E. Lee was the place where the ultra-right held a rally in August to prevent his Dismounting. In protest of anti-fascists killed 32-year-old Gezer Geer, which at speed was hit by a car a supporter of right-wing radicals. Currently, the statue of General Lee closed with a white cloth until there is a trial appeal against the decision to dismantle the monument.