Home / photo report / In Canada, discovered a lobster with “tattoo”

In Canada, discovered a lobster with “tattoo” 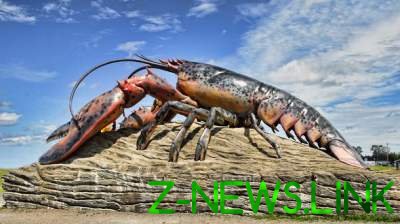 Canadian fishermen caught in the Bay of Fundy lobster with Pepsi logo, displayed on its claw. Reported by the Guardian.
The first unusual find was noticed Carissa Lindstrand that rewinding claw lobster. She noted that the shellfish are red, white and blue sign, which she immediately recognized the logo of Pepsi.

A week after the incident in the Network sparked controversy about how the logo could be on the claw of a lobster. Some have decided that a can of the drink could grow into crustaceans, others thought of the box from Pepsi could somehow stick to it. 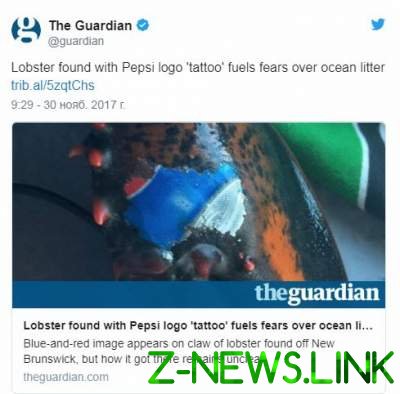 However, the woman does not agree with such theories. According to an eyewitness, the claw was clearly visible pixels, so “tattoo” could not appear due to the cans, and the image on the box is too high. The logo reminded Lindstrand printed image. However, the paper would dissolve in the water.

Finding once again reminded about the trash accumulating in the world’s waters. According to the environmentalists, the UN, in the ocean every year, plastic waste is dumped about 13 million tons. According to forecasts of the British Foundation the Ellen MacArthur Foundation, by 2025 for every three kilograms of fish in the oceans would account for a kilogram of garbage, and by 2050 the amount of waste will be higher than the cumulative weight of all fish on Earth.