Home / Video news / In Britain the hunter was beaten with a whip of animal rights activist. Video

In Britain the hunter was beaten with a whip of animal rights activist. Video 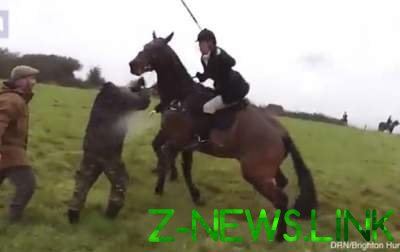 Woman sitting on horseback, beat the activist with a whip.

Newspaper Daily Mail published a video showing a hunter sitting on horseback, beat with a whip activist. It is reported that a man came to protest against hunting animals.

The video shows how the rider shouts activists: “get Out of the way”. One of the men grabs her horse by the bridle, and provokes the girl to cruelty.

The rider, according to the man, hit him at least 17 times with a whip. However, the hospitalization he did not have – he only received bruises on his face and head.

At the same time, representatives of the organization of protection of the rights of the villagers Countryside Alliance said that the man himself was to blame in the incident, too much grabbing for the reins the horse of the girl.

“Hunters will observe all rules, however, they constantly interfere with these activists in balaclavas and provoke their aggression,” said one of the representatives.