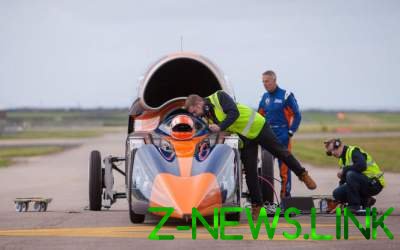 Under the hood of the car has an engine Eurofighter Typhoon.

The first tests of the supersonic car Bloodhound SSC took place at the airfield of the town of Newquay in the UK.

In the first phase of testing the car was able to accelerate on the runway to 322 km per hour in 9 seconds.

Driving the car was a squadron commander of Royal air force Andy green, who holds the world speed record for a car. It is noted that the three-kilometer length of the runway did not allow the car Bloodhound SSC to achieve higher speed.

Under the hood of the car has an engine Eurofighter Typhoon. This motor should be enough to disperse the car up to 1046 km/h, then starts working hybrid rocket propulsion. Total power of engines – 133151 horsepower.

For the first test, the car was fitted with carbon disc brakes and wheels with rubber tyres from Dunlop Electric Lightning fighters. For more speed runs will put a solid aluminum discs, since rubber tires do not stand up to that speed. It is expected that at full capacity, the Bloodhound will reach speeds of 1,000 miles per hour in less than a minute.

It is anticipated that Bloodhound SSC will be the first car that can exceed the speed of 1,609 kilometers per hour. The following tests are at the bottom of lake Hackin pan in South Africa.