Home / INCREDIBLE / In Britain shot a UFO disguised as a cloud

In Britain shot a UFO disguised as a cloud 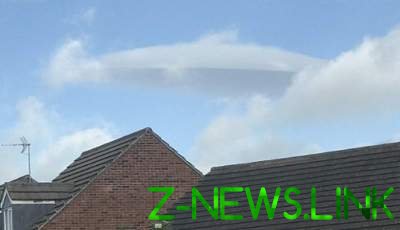 The picture is not a photomontage and not a scene from a science fiction movie, but real picture, taken June 18 of this year in the English Spa town of Harrogate, in the County of North Yorkshire.

Dozens of locals unexpectedly witnessed the appearance of their homes a huge object which at a cursory glance could be confused with the cloud.

Many citizens probably did so, however, careful observers knew immediately that there was something strange. If this is not an accident (freak of nature), then the cloud is clearly reasonable.

Many ufologists who have become acquainted with a mysterious frame in the Network, also felt that we face is not a cloud. The researchers of aliens say that we are talking about masquerading as heavenly water condensate “flying saucer,” and cite several arguments in favor of his theory:

– first, the proposed aircraft alien has a perfectly smooth disc shape, which are excluded from these clouds;
– secondly, the lower part of the UFO shows a very clear shadow, so one can conclude that it is in fact a solid one-piece object;

finally, the witnesses all state that the cloud eventually disappeared in the sky, not “blur” into something amorphous, as expected by many, and lightning sailed away.