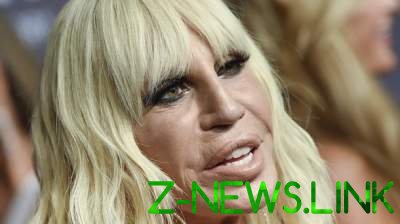 The fashion icon has officially become a sister of the founder of famous Versace brand Donatella Versace, who is not shy to pose in a bikini. The award on 4 December was awarded the British Fashion Council as part of London Fashion Awards ceremony.

The award of the British fashion Council will award the Donatella for the strength and dedication to the industry, which entered the history of world fashion.

“She showed incredible strength and dedication of the industry, continued the legacy of his brother with the help of outstanding work. Thanks to her, women look and feel strong,” commented Natalie Massenet, President of the British Fashion Council.
That year marks the 20th anniversary of the death of the famous brother, Gianni Versace, and next year will be the anniversary of the brand 40 years from the founding of the house of Versace.

Recall that Gianni Versace founded his fashion house in 1978. The public immediately fell in love with the daring splendor of its collections – clothing designer always differed with rich colors, bold prints and impeccable tailoring. After his brother’s death in 1997 the Versace brand started to curate Donatella Versace, clearly following the course set back in the eighties.